Showing posts from September, 2014
Show all

Title: Joseph pardons his brothers Artist: Bacchiacca, 1515 This painting is one of a series of   panels   that decorated the bedchamber of the Borgherini Palazzo in Florence . Together, they tell the life of   Joseph   from the Bible (Old Testament). Here Joseph pardons his brothers for selling him into slavery.   On the le ft, the brothers are brought to Joseph, with Benjamin the youngest a prisoner. On the right, they beg for Joseph's mercy and he forgives them. Worship Theme: The Church forgives as God forgives. Anytime we try to imitate God, we quickly realize our inadequacy. Yet today God tells us to model our forgiveness on his: a boundless, free, and loving forgiveness based on the sacrifice of Christ. Old Testament:   Genesis 50:15-21 When Joseph's brothers saw that their father was dead, they said, "What if Joseph holds a grudge against us and pays us back for all the wrongs we did to him?" 16 So they sent word to Joseph, saying, &qu
Post a Comment
Read more

The archangel vs. the angel of light 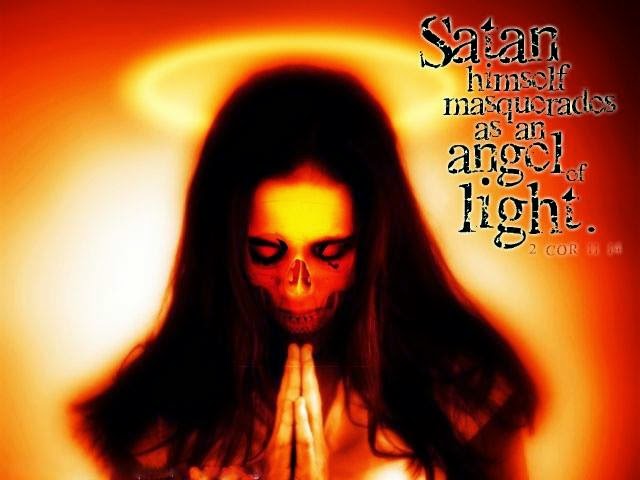 2 Corinthians 11:14 And no wonder, for Satan himself masquerades as an angel of light. Your daughter is on the club soccer team. Your son has a part-time job after school. You’ve just received a raise and more responsibility at work. Your cancer is in remission. Your boyfriend or girlfriend wants to take your relationship to the next level. You finally have your “man cave” or your crafting room. And the devil laughs. Try to imagine our world if the devil had control. What would Racine look like if Jesus took the leash off the devil and let him loose to create havoc? Immediately our mind imagines that downtown Racine would look like Ukraine or Iraq . We imagine a strip club on Bate St. and a drug house on Olive St. We picture mass chaos, bloodshed, and moral decay. Certainly Satan might appear as he does in Revelation – as a dragon tearing apart the fabric of our society. Or he might appear as St. Paul describes him, “masquerading as an angel of light” (2 Corinth
Post a Comment
Read more

Guardians of the Galaxy

The most popular film of 2014 has been Guardians of the Galaxy. The newest movie by the Marvel franchise features brash adventurer Peter Quill and his quartet of misfits - Rocket, a gun-toting raccoon, Groot, a tree-like humanoid, the deadly and enigmatic Gamora and the revenge-driven Drax the Destroyer. This is the first of many movies that will feature Quill and his friends guarding the galaxy from various dangers and foes. The Bible speaks of God’s holy angels as guardians of the galaxy. Psalm 91 specifically tells us that “[God] will command His angels concerning you to guard you in all your ways. They will lift you up in their hands, so that you will not strike your foot against a stone.” Thank God for guardian angels. These angels protect Christians from meaningless harm. They ensure our safety. Artists, like Michelangelo with his Sistine Chapel, like to picture angels as being cute little cherubs, little baby angels, or beautiful female angels. In reality, God speaks of
Post a Comment
Read more

Worship Helps for St. Michael and All Angels 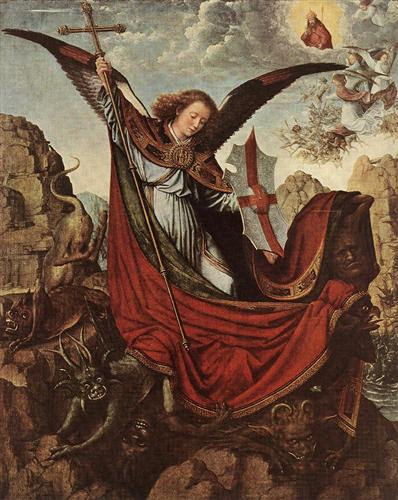 Artwork: Altar of Archangel Michael Artist: Gerard David Date: 1510 Worship Theme: This Sunday we break from the traditional readings for the 16 th Sunday after Pentecost to celebrate the minor church festival of St. Michael and All Angels. On the Feast of Michael and all Angels, normally set aside for September 29, we give thanks for the many ways in which God's loving care watches over us, both directly and indirectly, and we are reminded that the richness and variety of God's creation far exceeds our knowledge of it. Old Testament: Daniel 10:10 A hand touched me and set me trembling on my hands and knees. 11 He said, "Daniel, you who are highly esteemed, consider carefully the words I am about to speak to you, and stand up, for I have now been sent to you." And when he said this to me, I stood up trembling. 12 Then he continued, "Do not be afraid, Daniel. Since the first day that you set your mind to gain understanding and to humble yours
Post a Comment
Read more

A true superhero for our time

Judges 16:22 -31 But the hair on his head began to grow again after it had been shaved. 23 Now the rulers of the Philistines assembled to offer a great sacrifice to Dagon their god and to celebrate, saying, "Our god has delivered Samson, our enemy, into our hands." 24 When the people saw him, they praised their god, saying, "Our god has delivered our enemy into our hands, the one who laid waste our land and multiplied our slain." 25 While they were in high spirits, they shouted, "Bring out Samson to entertain us." So they called Samson out of the prison, and he performed for them. When they stood him among the pillars, 26 Samson said to the servant who held his hand, "Put me where I can feel the pillars that support the temple, so that I may lean against them." 27 Now the temple was crowded with men and women; all the rulers of the Philistines were there, and on the roof were about three thousand men and women watching Samson perform
Post a Comment
Read more

In chains, with eyes gouged out, a spectacle for his enemies, Samson asks not for deliverance or protection, but only that the Lord remember him. For human beings remembering can be a scary and subjective thing. When we remember it is like calling up hazy picture from the past. We bring that picture into the present and examine it. The picture resembles what was real but it is always distorted by context and chronological distance. Those pictures are connected to strong emotions. While some are positive like the joy of victory or accomplishment, others carry the humiliating shame of regret or the pain of sudden loss. So when we preach of remembering, we aren't concerned with recollection of grocery lists and anniversaries. We are speaking to hearts like David's, crushed with fear that his Lord might remember with anger the sins of his youth. We are speaking to hearts like the thief on the cross who knew that death as justice for his crimes was near. We are speaking
Post a Comment
Read more 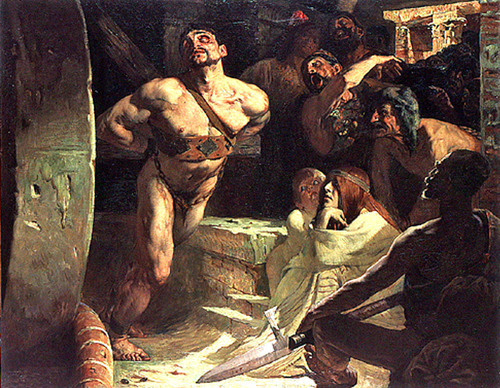 Title: Samson at the Mill Artist: Maurice Theodore Mitrecey “Then the Philistines seized him, gouged out his eyes and took him down to Gaza . Binding him with bronze shackles, they set him to grinding in the prison” (Judges 16:21 ). Samson has had his head shaved, his strength removed and his eyes gouged out. He has been taken to the city of Gaza , whose mighty gates he had once torn off the city walls and carried to a nearby hill. He is pictured doing the work of a mule, grinding grain in Gaza ’s prison. But his hair is growing back and his strength is returning. He is able to move the cumbersome millstone by himself. He cannot see the woman sitting nearby who is watching him with fascination. Nor can he set his eyes on the prison guards who no longer fear him. They do not hesitate to mock him and make sport of him. One of them even striking Samson on the cheek as he passes by. But the greatest victory over the Philistines has not yet carried out by Samson. His
Post a Comment
Read more
More posts