Showing posts from December, 2015
Show all

Artwork: Adoration of the Magi Artist: Andrea Mantegna Next Sunday we are celebrating the second Sunday after Christmas. But I am sharing with you the lessons for the Epiphany Festival for January 6 at 6:30 pm at Epiphany so that you may learn more about this high festival of the Christian Church year, and also appreciate the name of your church. Worship Theme: The season of Epiphany (the Greek word for “appearance”) recalls how Jesus proved himself to be the Son of God and the Savior of all people. The Festival of the Epiphany of Our Lord is celebrated on January 6, the twelfth day of Christmas, and is often called the Gentile Christmas. In the lessons and the Gospel, God makes it abundantly clear that his salvation is not only for his chosen Old Testament people but also for the Gentiles (non-Jews). Jesus is the Savior of all people! Old Testament: Isaiah 60:1 "Arise, shine, for your light has come, and the glory of the LORD rises upon you. 2 See, darkness
Post a Comment
Read more

The twelve-year-old God who is our Passover Lamb

Luke 2:41 Every year his parents went to Jerusalem for the Feast of the Passover. 42 When he was twelve years old, they went up to the Feast, according to the custom. 43 After the Feast was over, while his parents were returning home, the boy Jesus stayed behind in Jerusalem, but they were unaware of it. 44 Thinking he was in their company, they traveled on for a day. Then they began looking for him among their relatives and friends. 45 When they did not find him, they went back to Jerusalem to look for him. 46 After three days they found him in the temple courts, sitting among the teachers, listening to them and asking them questions. 47 Everyone who heard him was amazed at his understanding and his answers. 48 When his parents saw him, they were astonished. His mother said to him, "Son, why have you treated us like this? Your father and I have been anxiously searching for you." 49 "Why were you searching for me?" he asked. "Didn't you k
Post a Comment
Read more

The mystery and miracle of nothing 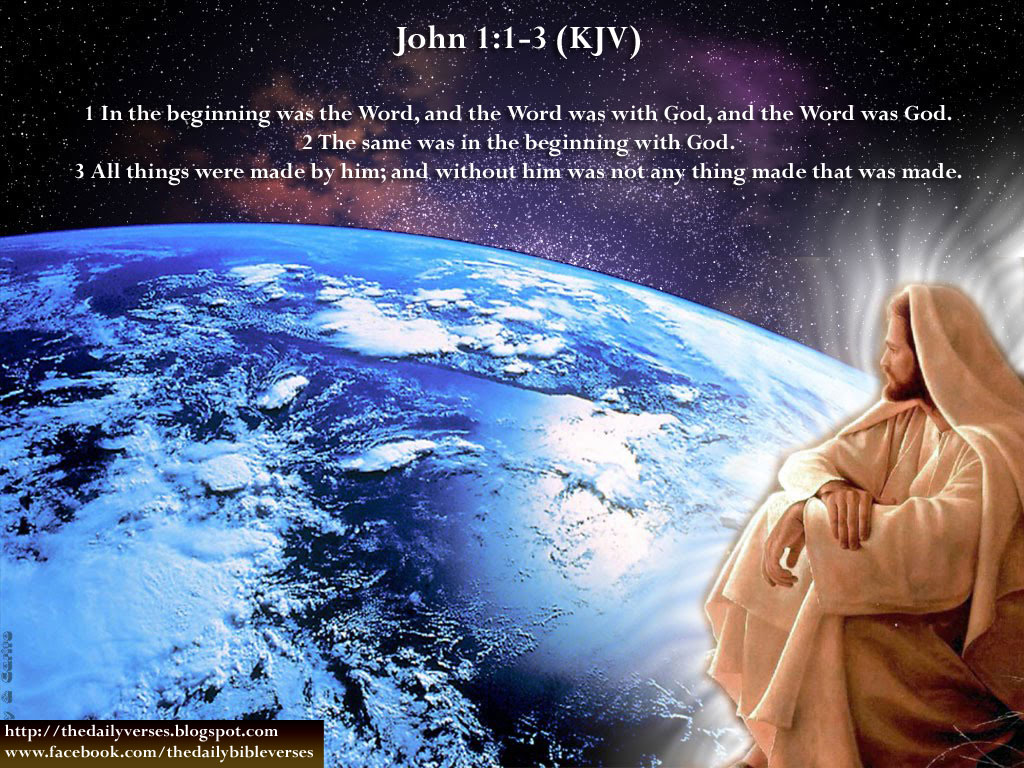 John 1:1-3 In the beginning was the Word,   and the Word was with God,   and the Word was God.   2  He was with God in the beginning.   3  Through him all things were made; without him nothing was made that has been made. You may not be able to get blood out of a turnip or make a silk purse out of a sow’s ear, but if you’re God, well, no sweat. His daily occupation is making something out of nothing. From dead dirt He molds a living man. From a piece of bone He builds a lovely bride. A ninety-year-old Sarah giggles when from her aged womb springs the life of Isaac. Aaron’s staff swallows snakes. Gideon is able to squeeze a bowlful of water out of a fleece. A boulder becomes a drinking fountain (or here in Wisconsin a “bubbler”) for thirsty Israelites in the desert. This is no magician pulling a rabbit out of a hat. This is simply God, the one and only, displaying His glory for all to see. It is all in a day’s work for the almighty God of heaven and earth. He is always pullin
Post a Comment
Read more 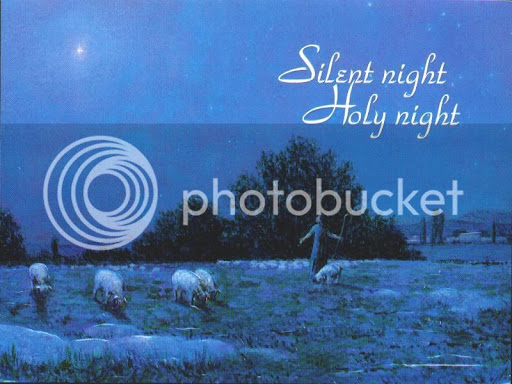 Luke 2:8-9 And there were shepherds living out in the fields nearby, keeping watch over their flocks at night.   9  An angel   of the Lord appeared to them, and the glory of the Lord shone around them, and they were terrified. On a cold Christmas Eve in the year 1818,   a young priest named Joseph Mohr quickly walked from his home in the small town in Oberndorf, Austria to the neighboring village of Amsdorf. He was carrying a piece of paper – a poem he had written two years earlier. He made his way to the schoolhouse, walked up the stairs and knocked on the door of the second floor apartment. He was greeted by his friend, Franz Gruber, the schoolmaster in Amsdorf and also the church organist. Father Mohr asked his friend to help him put his poem to music. He wanted a new Christmas hymn for the mass that evening. There was a catch, though. He wanted it played on guitar, not the organ. Over the years, many have speculated why. Some say the organ was broken. Others say it was
Post a Comment
Read more Luke 2:11 Today in the town of David a Savior   has been born to you; he is the Christ, the Lord. Our Sunday School children, Teens, and musicians are doing a wonderful job of presenting the Christmas message to us. But don’t you sometimes wish that you had been able to hear the story of Christ’s birth as the angels first shared it: “I bring you good news of great joy that will be for all the people” (Luke 2:10)? We need to keep going back to Scripture to hear the Christmas message because the message that society sends about this holiday is all mixed up. If you doubt there is such confusion, then listen to the little girl who told her baby brother the story of Christmas. Her rendition went this way: “Jesus was born just in time for Christmas, up at the North Pole surrounded by eight little reindeer and the Virgin Mary. Then Santa Claus showed up with lots of toys and stuff and some swaddling clothes. The three wise men and elves sang carols, while the Little Drummer Boy an
Post a Comment
Read more

No let down from the anticipation 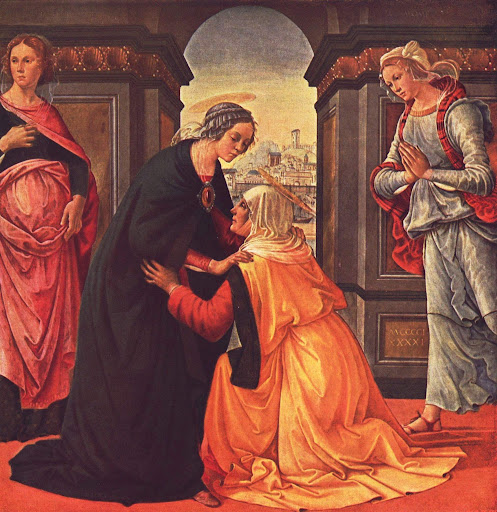 Luke 1:39 At that time Mary got ready and hurried to a town in the hill country of Judea, 40 where she entered Zechariah's home and greeted Elizabeth. 41 When Elizabeth heard Mary's greeting, the baby leaped in her womb, and Elizabeth was filled with the Holy Spirit. 42 In a loud voice she exclaimed: "Blessed are you among women, and blessed is the child you will bear! 43 But why am I so favored, that the mother of my Lord should come to me? 44 As soon as the sound of your greeting reached my ears, the baby in my womb leaped for joy. 45 Blessed is she who has believed that what the Lord has said to her will be accomplished!" 46 And Mary said: "My soul glorifies the Lord 47 and my spirit rejoices in God my Savior, 48 for he has been mindful of the humble state of his servant. From now on all generations will call me blessed, 49 for the Mighty One has done great things for me-- holy is his name. 50 His mercy extends to those who fear him, f
Post a Comment
Read more 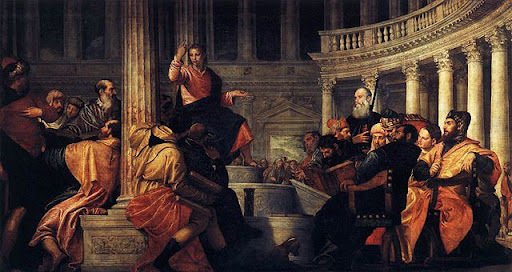 Artwork: Jesus among the Doctors in the Temple Artist: Paolo Veronese Worship Theme: The readings today give us a window into our salvation and eternal glory, via the boyhood years of Jesus.  The early life of Samuel has some interesting parallels to that of Jesus. In Hebrews Jesus willingly becomes one of us, and calls us “brothers.” Look in wonder at Jesus, the almighty God, going through early, learning years just as we all do. Old Testament: 1 Samuel 2:18-20, 26 But Samuel was ministering before the LORD-- a boy wearing a linen ephod. 19 Each year his mother made him a little robe and took it to him when she went up with her husband to offer the annual sacrifice. 20 Eli would bless Elkanah and his wife, saying, "May the LORD give you children by this woman to take the place of the one she prayed for and gave to the LORD." Then they would go home. … 26 And the boy Samuel continued to grow in stature and in favor with the LORD and with men. 1. What
Post a Comment
Read more

The Song of Mary

Mary gets quite a bit of credit for her faith - and rightly so. She had been delivered a piece of news that was startling on at least two fronts: that she, a virgin, would give birth to a child and that she, of all women, had been chosen to be the mother of the promised Messiah. Her Spirit-worked response certainly is praiseworthy: “May it be to me as you have said” (Luke 1:38). But as much as we admire her faith, we ought to admire her song. The words are familiar to us because they have found a place in the pattern of worship Christians have used for centuries. And the circumstances in which those words were delivered make her song truly remarkable. Mary’s song was first delivered in connection with her visit to Elizabeth. Immediately preceding this song, Elizabeth had called Mary blessed three separate times (twice in v. 42, once in v. 45). Elizabeth’s words are also familiar to us, but not for a good reason. They are used by many to address prayers to Mary. “Blessed are
Post a Comment
Read more
More posts